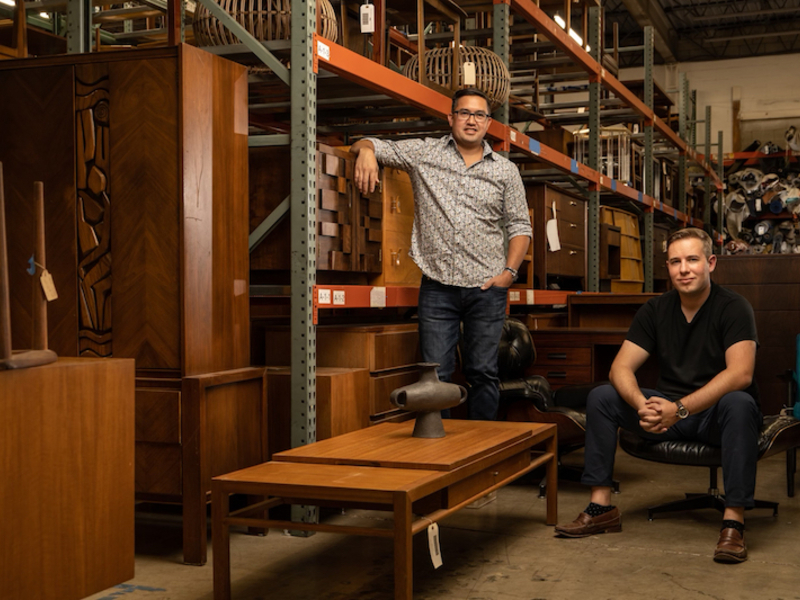 The tight supply of new furniture continued an upward trend in antique sales that started last year as nesting shoppers spent money on furniture instead of travel. Industry operators have questioned whether the revenue surge will fade, but 2021 brought even higher sales.

It’s not just vintage and antique items that arouse interest, says Horn. A set of 10 dining chairs, eight to 10 years old, sold in a recent auction for $ 18,000, which was close to the original retail price.

“It tells me that someone is building a new house and can’t order chairs in a showroom, and they just want the project done,” says Horn. “They or the designer buy all the chairs they can get their hands on. “

Other dealers have similar stories. Tom Jolly, owner of Thomas Jolly Antiques in Buchanan, Michigan, says an interior designer from New York City recently bought a leather sofa for $ 8,000 and then reupholstered it in mohair. Richard Wright, owner of the Wright auction house in Chicago, said customers turned to him after learning new products ordered elsewhere would arrive months later than expected. “They tell me ‘I can’t take it,’” he said.

Supply shortages in furniture and many other industries are linked to the pandemic. Virus outbreaks among workers have cut production at furniture factories in the United States and abroad, said Martin Lariviere, an operations professor at the Kellogg School of Management at Northwestern University.

The surge in demand for many products has also caused a delay in shipping, leaving containers in ports and driving up shipping costs. A tight labor market, which has affected the freight industry, is not helping.

Delivery times for custom furniture have gone from six weeks to six months or more, said Mark Schumacher, CEO of the Home Furnishings Association industry group. A retailer may have paid $ 2,500 to ship a container with 18 sectional sofas from overseas before COVID-19. By July, the cost had climbed to $ 20,000, says Schumacher.

Some consumers are willing to pay the additional costs and wait. But in a retail environment that has become largely instant gratification, many are not.

“If the consumer can’t get what they want right now, then they will look for alternatives,” says Schumacher.

Antique store and auction house operators are changing their workflows to adapt. Horn says he’s looking for new ways to deliver properties that Hindman Auctions may not have specialized in before; Cerny at the Broadway Antique Market now only holds items until the end of the day, instead of 24 hours. Many dealerships have hired new workers, extended their hours, and increased online sales.

Designer Marshall Erb, director of Chicago-based Marshall Erb Design, says shipping delays forced him to rework his design process. He waits longer to present the designs to customers, to ensure that the parts will be available and that the prices do not fluctuate too drastically. It’s exhausting, he says, and a customer service nightmare. Previously, transportation costs represented around 12% of a project’s budget. It has increased from 20 to 25%.

“We try as much as possible to use local suppliers, whether they come from the aftermarket or auction houses,” says Erb.

Of course, antique dealers suffered alongside other retailers when non-essential businesses were forced to shut down at the onset of the pandemic. But business picked up quickly after the reopening, as people needed desks and chairs to work from home. Another boost came when the working from home trend prompted people to buy larger homes or second homes, which needed to be furnished.

Many home goods stores have also seen their sales increase. But unlike new pieces, used furniture has the added appeal of being viewed as environmentally friendly. This is an additional factor that works in favor of vintage dealers. Over the past 18 months, consumers have changed not only where they buy, but also why they buy, says Shivani Vora, who leads innovation for North America at consulting firm Accenture.

“Before, the motivation was price and quality,” she says. Now, they take into account things like durability, convenience and more.

Supply chain issues are the catalyst for bigger change, says Mike Solan, chief revenue officer at Modern Hill Furniture. He expects the Countryside vintage furniture store’s revenue to hit nearly $ 6 million this year, up from $ 1.8 million in 2020 and $ 1.2 million in 2019.

“It’s a trend that goes way beyond the pandemic,” Solan said. “It will be a trigger point, if you will, to kick off the return to vintage.”

Mike Solan’s last name has been corrected in this updated story.