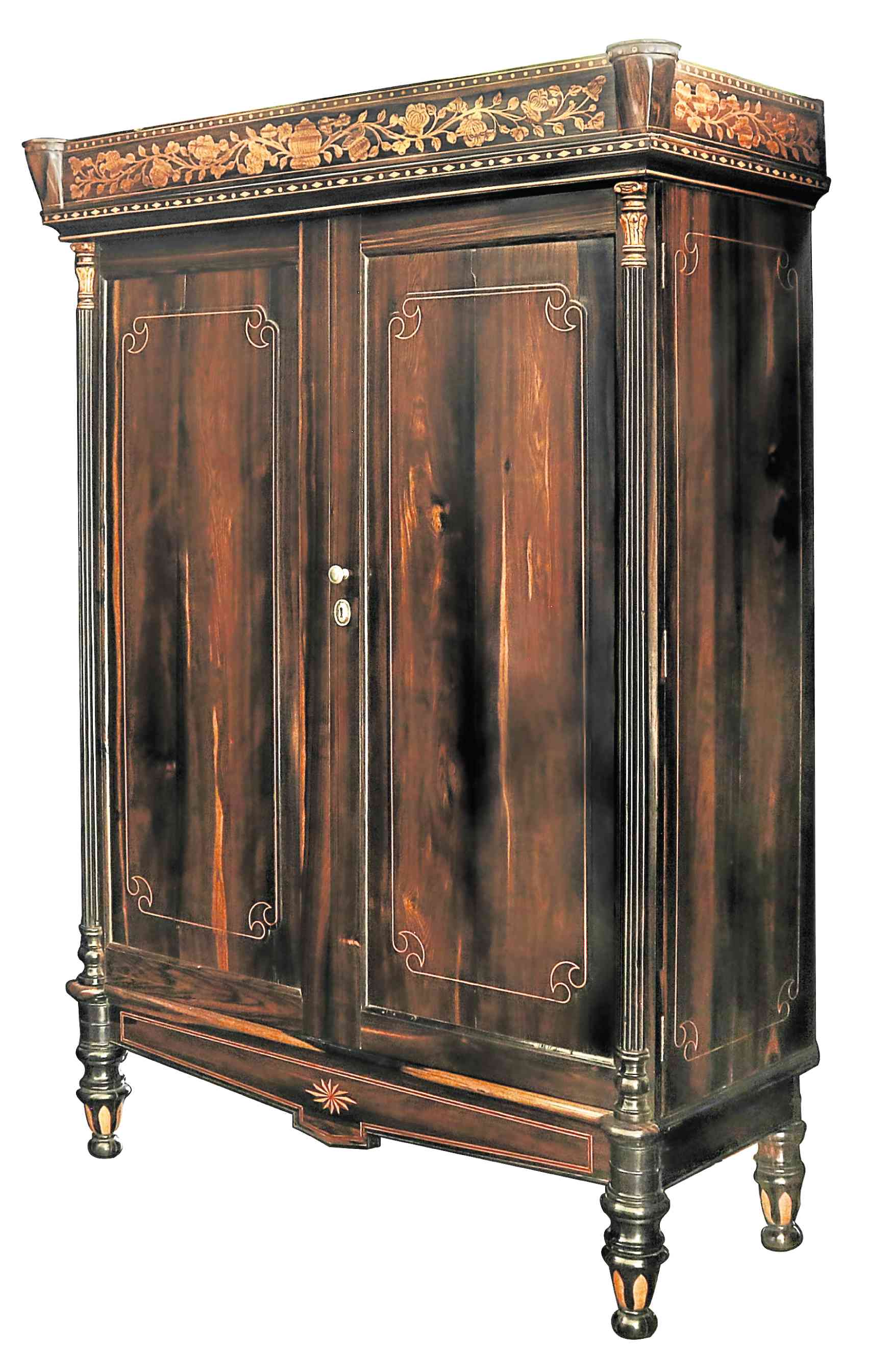 The exquisite 19th-century hardwood furniture that was part of the famous Romeo Jorge Collection is among the key lots of important antiques and art objects at the spectacular León Gallery Mid-Year 2019 auction, June 22.

The highlight of the auction is Romeo Jorge’s “Kamagong Aparador” from the second quarter of the 19th century. Made of kamagong and lanite, the cabinet rests on four vase-shaped legs carved with acanthus leaves bearing a drum-shaped entablature.

Between the upper entablature is, according to antiques expert Martin I. Tinio Jr., a frieze of lanita vines with flowers, leaves and buds of different sizes arranged symmetrically on either side of a large central flower . “The leaves and flowers are incised with black lines to give depth to the design and are definitely inspired by designs found in embroidery and goldsmithing from that era,” Tinio said.

The aparador has a starting price of 1.8 million pesos.

Another lot from the Jorge collection is the “Baliuag Altar Comoda” from the last quarter of the 19th century.

Made of narra, kamagong and bone, it is “faithful to the Baliuag style”, according to social historian Augusto Marcelino Reyes Gonzalez III. “It is made from golden narra wood and is embellished with engaged posts of dark kamagong wood and various inlays of carabao bone, pale lanite, and kamagong.”

“Altar Comoda” is very rare. The furniture is a “hybrid,” Gonzalez said, intended to be storage space for collections while also serving as an altar for religious icons. This hybrid type of Baliuag furniture was produced only for affluent customers, inevitably from large families of landowners and “hacendero” merchants, Gonzalez explained. “Few pieces are known and documented.

The floor price is 1.4 million pesos.

Romeo Jorge was an agribusiness industrialist who was a great collector of art and antiques in the 1980s along with Jaime Laya (for the administration of Intramuros), Paulino Que and Antonio Gutierrez.

“Today, the magnificent collections (of the Intramuros administration, Que, Gutierrez and Jorge) remain benchmarks of excellence in the field of Filipino art and antiques, each piece being rare and important in the national heritage. “said Gonzalez.

Another important lot is the Episcopal Chair from the first half of the 19th century.

Made of baticulated wood, the chair comes from the old Augustinian missions in the center of Luçon (Tarlac, Nueva Ecija, Pampanga, Bulacan) because it bears the symbol of the Augustinian order.

“This ecclesiastical chair,” said Gonzalez, “has an oval caned backrest flanked by panels of sculpted foliage shapes topped by a crest of openwork floral and leaf shapes depicting the ubiquitous catmon flowers and framing the Augustinian emblem of a heart. fire pierced with two arrows on an open book.

Another strong point is the Folk Ilocos cabinet in “golden narra” from the last quarter of the 19th century.

“It’s an interesting and eccentric firm. Apparently, there was an enthusiastic folk tradition of woodworking in the Ilocos during the last quarter of the 1800s. The artistic temperament of folk furniture reflected the Ilocano: robust, careful, self-confident, but surprisingly expressive, cheerful and playful.

Then there is the Pair of Baul (chests) from 1850 in balayageong or tindalo wood from Pampanga.

“19th century household chests had their antecedents in the solid hardwood chests that were used during the galleon trade between Acapulco and Manila from 1565 to 1815,” Gonzalez said. A surviving example is the solid hardwood chest marked “Obras Pias” from the 1700s belonging to the Roman Catholic Church which is on display at the Museo de San Agustin in Intramuros.

Another significant lot is the Filipino wooden divan from the second half of the 19th century, which Gonzalez described as “clearly derived from the American Empire with tints of English regency.” –CONTRIBUTED