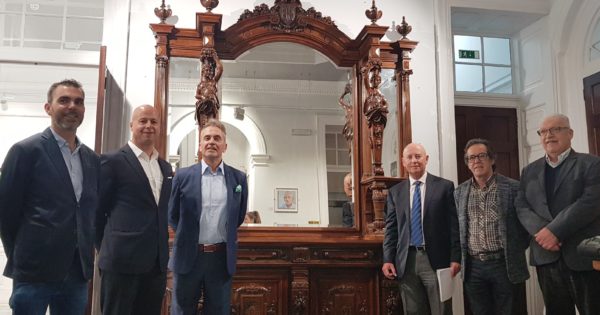 Newly restored antique furniture from Larios back to town hall

A unique antique piece of furniture, a mirrored sideboard belonging to the Larios family, has been restored and is now on display in the Town Hall of the Mario Finlayson National Art Gallery.

The restoration was commissioned by the Department of Environment and Heritage following the discovery of the piece on private Main Street property and the new owner kindly donated it to the government through the Gibraltar Heritage Trust which was instrumental in liaison with developers in construction. conservation work.

The Larios family, one of the most influential families in Gibraltar history, once owned this ornate mirrored sideboard from the late 1800s that once graced the dining room on the first floor of Town Hall when it was owned by the family.

The piece was restored by Robert Sanguinetti and lasted three months.

Heritage Minister John Cortes described this mirrored sideboard as a “work of art”. Referring to Gibraltar’s rich heritage, he commented on how “it sometimes shows up in unexpected corners in unexpected ways”.

“I am so happy that it has been so skillfully restored and found its place in my home in a place where it can be seen and enjoyed by all,” he added.

For his part, during the unveiling this week in the city, the chairman of the Gibraltar Heritage Trust, spoke about what could be achieved when groups and entities work together to help preserve something worth preserving.

“It is important that we all work together as we did for this antique piece from a previous generation so that people can admire it when restored for many generations to come,” he said.

This sideboard is carved from walnut wood in the Rococo Victorian style (also known as Late Baroque) which was very fashionable in the 1870s. Ornate furniture from this period often features themes inspired by nature such as fruits, seeds, and nuts, as well as Greek-inspired images – in this case, goddess-shaped carvings on the poles and ornamental urn florets along the top.

It is likely that this piece was made to order by a cabinet maker in neighboring Spain, where walnut wood is readily available.

The monogram “PL” in the center of the shield, at the top of the coin, confirms the ownership of this statement piece by Pablo Larios himself.

The Town Hall was originally built in 1815 by one of the Rock’s leading merchants, Aaron Cardozo. Over the years the building changed hands on several occasions, being occupied by the Gibraltar Garrison Club in 1833 and becoming the Club Hotel from 1839 to 1875. It was later purchased by Pablo Antonio Larios y Tashara, one of the main businessmen and owners. owners of the City. He was the descendant of an old Castilian family who had acquired a right of residence in Gibraltar.

Larios carried out a thorough renovation and refurbishment of his new acquisition with a new storey added along the west face of the building, crowned with a white marble balustrade. The dining room, located to the south of the building, has undergone extensive renovations.

The main features of this room were the fireplace with carved alabaster panels and this massive richly carved sideboard. This buffet was then moved to other premises and rediscovered years later in private property on Main Street.